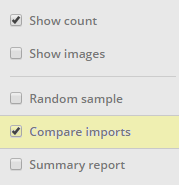 5 main areas of the "Compare" feature:

1.
Select which imports to compare — Select the two different dates from the "Import A" and "Import B" dropdown boxes. Note that "Import B" defaults to the most recent feed date and its corresponding data in the results is always blue.

2.
Viewable columns — This select box chooses which columns (fields) to view. By default, no columns are selected (which means all columns are included). Use "ctrl-click" to choose only certain columns. For example, if you're only interested in how title and availability differ between two feeds, you would only select those two columns. In this case, the results will only show you items that differ in title and availability. Note: The "ID" field is always included in the results because this is the linkage between the two sets of data you're comparing. 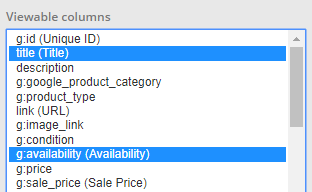 3.
Ignore columns (NEW) — This is a more advanced feature that allows you further refine exactly which attributes you want to perform the compare on.

From the previous example, you might have only selected title and availability in the "Viewable columns" area, but you find that you'd also like to see each product's link, brand, and mpn as well. You want to include those additional columns, but you want to keep your primary request the same: only show me items that differ on title and availability.

This can be accomplished with the "Ignore columns" select box. You would select the five attributes in the "Viewable columns" (title, availability, link, brand, mpn). Now in the "Ignore columns" box you would select link, brand, and mpn to ignore differences in these fields. This tells VersaFeed to only show items that differ on title and availability, while still showing the rest of the fields in the output for reference. Had you not selected link/brand/mpn in the "Ignore columns" box, the output would also show you items that had differences in these fields. You may also notice even if you don't select to view the ID column it is still included in the results. It will also show in the Ignore columns select box but has no effect on the resulting items.

In summary, advanced users can use "Ignore columns" to see lots of product attributes in the compare output, but still limit that output to items that only differ on certain attributes.
4.
Ignore items unique to one or both imports (NEW) — Often times, the compare results may get cluttered by items that existed in one feed but not the other. In these cases, you may wind up with large lists of compare outputs that simply say "does not exist".

By selecting one or both of these new checkboxes, you can now ignore items that don't exist in one or both feeds. This will clean up your search results and only show you items that existed in both feeds and had at least one difference. Note: You may still see differences in one or more fields that are being ignored, but only items with differences in non-ignored fields are considered for the results.
5.
Include items without differences (NEW) — By default, the compare results only includes items with at least one difference between the two imports. When selected, this new option will force the results to include all items, regardless of whether they had any differences between the two imports.

Also, don't forget you can apply the "Compare" option on Feed Summaries and "Summary report" searches as well. These are excellent ways to quickly see "big picture" changes between two feeds.

VersaFeed's compare tools allow power users to quickly and easily determine changes between feeds at two different points in time. This feature enables rapid testing of changes (e.g., did a feed modification perform as expected?). It can also be helpful for debugging performance issues (e.g., did something change to cause a dip in impressions?).

We are happy to set up a time for you to preview VersaFeed's software and learn more about our fully managed services.Please tell us a little bit about your business and we'll get back to you ASAP.